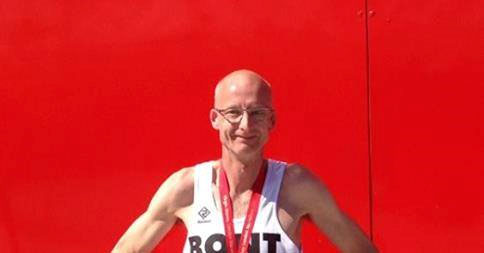 At the beginning of 2014, Jonathon was recovering from a knee injury that had stopped him running for three months, but that didn’t hinder his plans to run nine marathons and endurance events in just one year!

Next was the Leaden Boot Challenge in May, a 26 mile fell run with a 5,800ft ascent, completed anti-clockwise, and the fourth was the same race completed clockwise!

The Darren Holloway Memorial (Buttermere Horseshoe) fell race in June made it five marathons, with an impressive 9,000ft ascent!

The Lakeland 50 Mountain race in July (number six) was even tougher, with an 11,000ft ascent, followed by number seven – a gentler fell race, the Long Tour of Bradwell, which covered a 6,300ft ascent over 33 miles.

Still to go, Jonathon is planning to race in both the Jundfrau mountain marathon in Switzerland, as well as the more local Robin Hood Marathon in September, making it a grand total of nine events, covering 261 miles with a combined ascent of more than 42,000ft!

Just to put that into context, Nottingham to London is 125 miles, and Mount Everest’s highest peak is 29,000ft, so we’re sure you’ll agree Jonathon has gone above and beyond for Ben’s Den, not only putting himself through demanding physical challenges, but dedicating an entire year and every penny he raises to The Ben Parker Trust Fund. We can’t thank him enough for his wonderful support!

So far, Jonathon has raised over £1,000. If you’d like to help him raise more, please visit his Giving page here.

Massive thanks to Ian, for organising the cake sale for Ben’s Den at the Ilkeston Cyclo-Cross event at Shipley Country Park. Also thanks to Alannah, Summer, Linda and Steve for helping. Delicious cakes donated by generous cake bakers and purchased …